Running anti-clockwise for 650 miles from Minehead in Somerset, around the tip of Land’s End and back to South Haven Point at the mouth of Poole Harbour in Dorset, the South West Coast Path is Britain’s longest National Trail.

Bordered by the Bristol and English channels and looking out to the open Atlantic, it encompasses some of England’s most spectacular and wildest coastline, where the diversity of plant, animal and insect life can be stunning. The seas, coves and surrounding hinterland has been a dramatic setting for a gloriously rich history, which has inspired countless tales of romance, drama and intrigue.

The South West Coast Path has twice been voted ‘Britain’s Best Walking Route’ by the Ramblers and is often cited as one of the world’s best long distance trails. 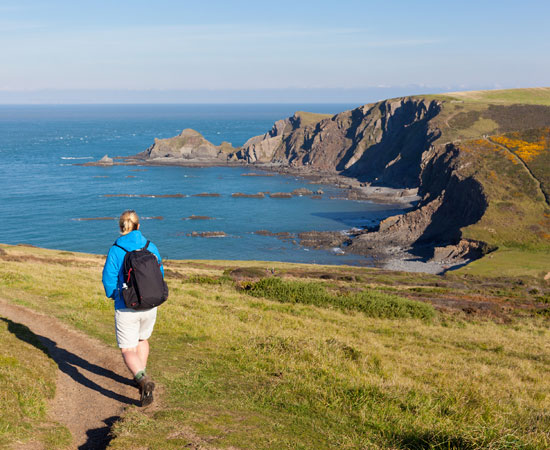 Large settlements are few, but occasional hamlets and villages grew around coves and landings where fishing and trade supplemented traditional farming inland.

Nature complements the intrinsic beauty of this landscape; seabirds abound, while the lush flora of unspoiled cliffs, native woodland, pasture and dunes supports smaller birds and countless butterflies. There’s plenty of other wildlife too and you may even see red deer.

From Bude to the western-most tip of England at Land’s End, Cornwall’s northern coast has a character all its own. Much of its 140 miles is set against the open Atlantic, whose winter storms and thundering waves have sculpted a rugged coastline of formidable cliffs. Tiny, wave-washed coves and zawns contrast with expansive beaches and dunes, the wild scenery often spilling offshore to half submerged reefs, stacks and islands.

Habitation and farming generally stand back to leave an untouched coast, although in places the relics of 19th-century mining remain as intriguing monuments to an industry that spanned 4,000 years. The holiday resorts of St Ives and Newquay attract summer crowds, but elsewhere, the coast is often deserted, with only seabirds for company

Running from Land’s End at the very western tip of England to Penlee Point, guarding the entrance to Plymouth Sound, Cornwall’s deeply convoluted south coast is infinitely varied, ranging from rugged cliffs braced against the full force of Atlantic waves to the sheltered Cornish Riviera where the weather, scenery and flora can be almost Mediterranean.

Snaking inlets, creeks and river estuaries take the unceasing creep and fall of the tide deep into the heartland, while on the coast, an endless succession of fine strands and sheltered coves compete with the best beaches in the world. Large towns are few, but attractive villages, hamlets and harbours abound, usually with a welcoming pub or café not far away.

Cornwall may be a popular summer destination, but there are any number of corners where you can walk the cliffs, hardly seeing a soul all day.

For many holiday-makers, Devon’s south coast is synonymous with the vast sweep of Torbay, which can be almost Mediterranean in climate and offers some of the country’s best loved holiday beaches.

Yet there is so much more, the character constantly changing throughout its 130-mile length. Although only the section east of Exmouth is part of the Jurassic Coast World Heritage Site, much of the rest lies within the South Devon AONB.

Few large conurbations infringe upon its lavish beauty and everywhere, abundant wildlife and flowers, a sense of history and the vivid revelation of geological formation serves to reflect and inspire

A UNESCO World Heritage Site, the southwest’s Jurassic coast stretches almost 100 miles from Studland in Dorset to Exmouth in Devon, revealing in the geology and fossils of its cliffs an almost unbroken record of 185 million years of the earth’s history.

From around 252 million years ago, a series of mass extinction events punctuated a gradually changing landscape driven by continental drift, creating successive opportunities for the biological diversity to renew. That age came to an abrupt end 65 million years ago with the planet’s last mass extinction, when a major meteoric impact wiped out the dinosaurs and tipped the balance of life in favour of mammals.

Extinct plants and animals have been fossilised in the dusts, sands and sediments laid down over those aeons, while the rocks themselves display something of the ever mutable landscape in which they lived. In general, the oldest rocks are exposed in the west but everywhere, the soaring height of the cliffs reflects millions of years of deposition and accumulation.