Walks in Snowdonia and North Wales

North Wales is a dramatic landscape with something to stir the blood of walkers and hikers of every taste and ability. At its heart lies the huge and rugged Snowdonia National Park, embracing cloud-wrapped mountains, deep glacial valleys, tranquil lakes, soaring cliffs and plunging waterfalls — as well as forest, moorland and seashore. Snowdonia itself is home to Wales’ fourteen highest peaks, all over 914 metres/3,000 feet, topped by Snowdon, whose highest summit, Yr Wyddfa, rises to 1085 metres/3,560 feet. 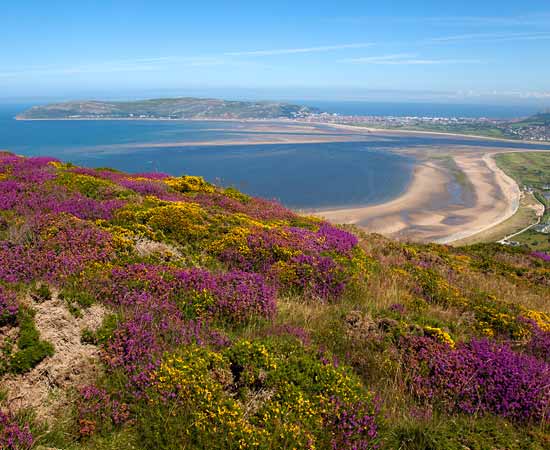 From Roman times onwards, this natural mountain fortress has protected the native Welsh from incomers and invaders. Llywelyn, the last Prince of Wales, retreated here to lick his wounds in 1277; and later, Snowdonia was Owain Glyndŵr’s last redoubt in his fight for an independent Wales. Centuries on, English slate barons made their fortunes here, on the backs of Welsh workers, in the mines and quarries; today, their dark spoil heaps and derelict works bring an atmospheric edge to the area’s natural scenic grandeur.

“Wales is one of the most picturesque countries in the world, in which Nature displays herself in her wildest, boldest, and loveliest forms…”

From the mid-nineteenth century onwards, Snowdonia drew ever-increasing numbers of visitors to marvel at her mountains, lakes and waterfalls. Numbers have grown ever since. Today, thousands of enthusiasts converge on Snowdonia during holidays and at weekends to enjoy what, by consensus, is the most dramatic and alluring part of Wales.

Further west lie Ynys Môn, or Anglesey, and the Lleyn Peninsula. In contrast to the mountainous mainland, Anglesey is largely flat, levelled by successive ice sheets and subsequent erosion. The resulting glacial boulder clays make for some of Wales’ richest farmland; and the island was once known as Mam Cymru, or the ‘mother of Wales’ for her role as the country’s bread basket. Away from the attractively varied coast, the landscape remains largely pastoral, with small fields, drystone walls, and traditional white-painted stone houses.

The end of Wales

The Lleyn takes its name from an old Irish word for ‘peninsula’. Known sometimes as the ‘Land’s End of Wales’, it’s a still relatively unknown, rocky finger jutting south-west into the Irish Sea. With its tiny coves and sandy bays, the wild north coast, especially, is a walkers’ paradise. From the distinctive triple peaks of Yr Eifl, the hills diminish towards Aberdaron, at the tip of the Lleyn — from where early pilgrims once set sail to the holy island of Bardsey, or Ynys Enlli — island of 20,000 saints. The tip of Llyn is a wonderful place, full of wild landscapes and swirling seabirds.

The ‘Top 10 Walks’ series picks the best and most popular walks for each of several key themes for that National Park. Current themes include: Mountain Walks and Ridge Wales, both by well-known outdoor writer Carl Rogers.